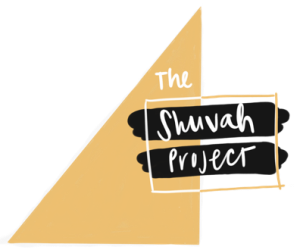 New to The Shuvah Project? Find out what it is and why it’s necessary.

But love your enemies, and show them kindness, and lend to them, never expecting a return. Then your reward will be great…

This week’s Parsha (Leviticus 1:1-6:7) contained: an introduction to the offerings taking place in front of the Tent of Meeting.

In the Midweek Reading Guide, we asked why does the author of Luke tie the Levitical laws about offerings to the beatitudes?

Let’s start with a fresh discussion regarding the offerings that show up in our Torah portion.

Four of the five involve animal sacrifice… which Rabbi Ami Silver of Aleph Beta points out as significant. Using his Text (Exodus 24:4-8; Leviticus 1:1-6:7; and Leviticus 17:11) and the Rabbinic wisdom of the Mishnah, Rabbi Silver makes the case that the blood is an important, maybe even central, part of the offerings, because — blood is the soul (Footnote #1).

We won’t camp on this discovery, but it will help inform future dialogue. What we will dig into further is why there are so many offerings. Why not just one that blankets everything? Seems simpler. And, from where we stand today, do we (i.e. persons following Jesus) gain anything from reading about the offerings at all?

I think we can gain something and it’s tied to the need for more than one type of offering.

Of the four animal offerings, the three basic ones are the sin offering, the wholeness offering, and the burnt offering (which Rabbis recognize as a poor translation).

Rabbi Fohrman notes that these three offerings are related.

The Table below summarizes his points.

The Sin Offering: In response to inadvertently transgressing the boundaries God set in place (i.e. displaying a lack of respect for them) God’s people were asked to come to the place God dwells with something of theirs. Maybe this offering is about rebuilding respect in the relationship with God.

The Peace Offering: Sometimes referred to as a wholeness or fellowship offering, is exactly that — a personal reminder that they are at peace with God. Furthermore, this same idea is invoked at the Mt. Sinai (i.e. the marriage between God and His people). Rabbi David Fohrman looks at who consumes the offering and notices that every party involved joins in the meal. Just like at a marriage feast — where friends, family, and lovers dine in celebration of a covenant between lovers.

The ‘Olah (i.e. Burnt Offering): Although mentioned first in the Text (hmmm) Rabbi Fohrman suggests that the ‘olah is the biggest/highest step the people could freely take to approach their relationship with God. God’s people had the option to give something of theirs completely to Him without receiving any portion of it back. The ‘olah, as Rabbi Fohrman puts it, is a recognition that we are not equals with God. Symbolically, God’s people willingly surrendered what was theirs for nothing in return. It’s about awe. It’s about trust. It’s a realization of just how big God really is.

The sacrificial system no longer exists. The Temple was destroyed. Jesus’ crucifixion is part of our story. Yet, if Rabbi Fohrman’s theory of relationship stands… we gain an understanding of how to be in a relationship with God.

Maybe to approach God with respect, love, and awe today, we can offer something else — ourselves, our souls to the work of bringing Heaven crashing into the earth (footnote #2).

Is it possible that Rabbi David Fohrman’s theory is not a new understanding? Granted we have yet to talk about “abolish and fulfill”, but just go with it for a second. Rabbinically, fulfilling the Torah is about a correct interpretation, not about completing it (Footnote #3).

If true, the Luke Text has Jesus’ words commenting on the offering section. Is it possible Jesus’ words are positioned by the author to help us (i.e. the audience) better interpret the offerings?

I’m going to argue that Luke 6:20-36 should be read together. Go re-read that section of Luke in light of what was just presented in Section One of this post.

Now that you’re back… notice anything?

Well, there are clear differences in The Beatitudes when compared to Matthew. 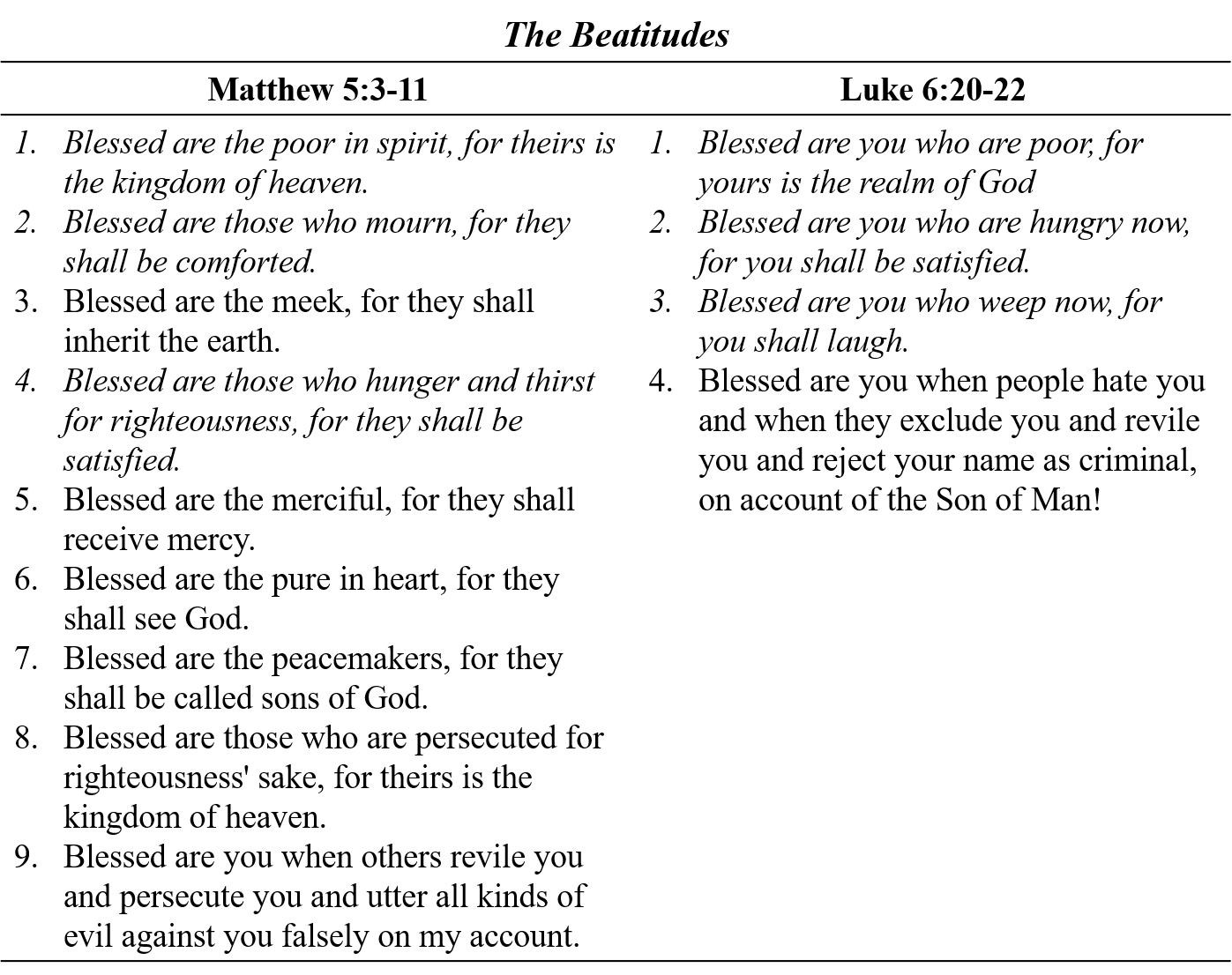 In our Luke Text, there are less than half as many Beatitudes. The Beatitudes that do correspond with the Matthew Text (italicized in the table), are altered.

Do the adjustments matter? I think they might in light of the connection to our parsha in Leviticus. For one, the Luke Text seems to make it about the financially poor, not the spiritually poor. Second, the author of Luke makes it about the realm/kingdom of God, not specifically heaven. Third, the Luke Text seems to focus on hunger as it relates to food, not for the ideal of righteousness. Fourth, the author of Luke suggests the opposite of weeping is laughter, not comfort. Lastly, by truncating the list of Beatitudes I think the Luke Text now juxtaposes two distinct socioeconomic groups (e.g. impoverished and affluent) in verses 20-26, whereas the Matthew Text is more ambiguous (e.g. pure in heart and peacemakers).

The section as a whole (6:20-36) references three basic attributes of lower socioeconomic status (e.g. poor, hungry, and weeping) and describes the right way to be in relationships with fellow human beings (Luke 6:27-36).

Wouldn’t it be awesome if Jesus, a Rabbi, had familiarity with the three levels of relationship symbolism connected to the offerings?

I think there’s evidence to suggest it’s a possibility.

“Blessed are the poor…” & The Sin Offering:

“Blessed are the hungry…” & The Peace Offering:

As it turns out the Peace Offering is the only one of the five offerings that involves the participant eating a portion of the offering. As discussed above, the Peace Offering is a shared meal. In fact, there’s an accompanying command in Leviticus 7:15 that says the participant cannot leave any of the meal until morning. A command to not leave leftovers sounds like it would fill someone up.

What would turn weeping into laughter other than awe-ness of the Creator of the universe? I would imagine a person can’t help but laugh in the presence of something so much bigger than themselves. In fact, we find precedence for this notion when the Divine visits Abraham and Sarah at their tent (Genesis 18). In that story, the Divine says that a discouraged, elderly Sarah will bear a biological son. Her response: laughter! What’s more, the Greek for laugh in Luke 6:21 — gelaō — only shows up twice in all of NT, it’s here. But, it does show up in the Septuagint. The first of the few Septuagint references… when Sarah laughs (Genesis 18:15)! Seems like the author of Luke has a point to make.

Exiting the Beatitudes and heading into Luke 6:27-36, I think we find all sorts of references to the aspiring, elevated, awesome relationship with God.

The blessed person, who, in context, seems to ascend to a state of awe… is then told:

To me, Jesus’ words here appear similar to how Rabbi Fohrman understands the ‘olah.

I think it sums to this: if we bring ourselves to be in an awe-inspired relationship with God, we are invited to treat all of humanity the same way. This can sound like idolatry, but it’s not. It’s trust. Isn’t that what awe-ness really comes to… do we trust that God is as big as He says He is? That God, in fact, did create the universe in some fashion? If yes, then we can symbolically offer Him something without expecting anything in return. Likewise, we can offer our things to anyone who asks (even our enemies) without expectation of something in return.

It’s worth asking… how do our leaders respond to transgressing God’s boundaries?

Well when the President does it, that means that it is not illegal.

-Richard Nixon, in an interview with David Frost

Apparently, one response is to redefine it and rationalize the action.

Fortunate is the generation whose leader [does not hold himself too high, but rather,] gives attention to bringing an atonement offering for his unintentional sins and how much more will he experience remorse for the sins he has committed willfully!

Unfortunate is the congregation whose leadership redefines, rationalizes, and covers up their lack of respect.

…. we can take care of the poor because we respect God.

…. we can take care of the hungry because we love God.

…. we can love our enemies because we are in awe of God.

3 thoughts on “The Shuvah Project #26 — Relationship with the Divine”